The History of Filter Presses

June 8, 2018
Although Filter Presses are commonly used in the mining industry to dewater tailings due to increasing environmental regulations, they are not a new technology. Filter Presses date back thousands of years and have been used all over the world for various reasons. In this post, we take a look at the history of Filter Presses and how they have changed over time. 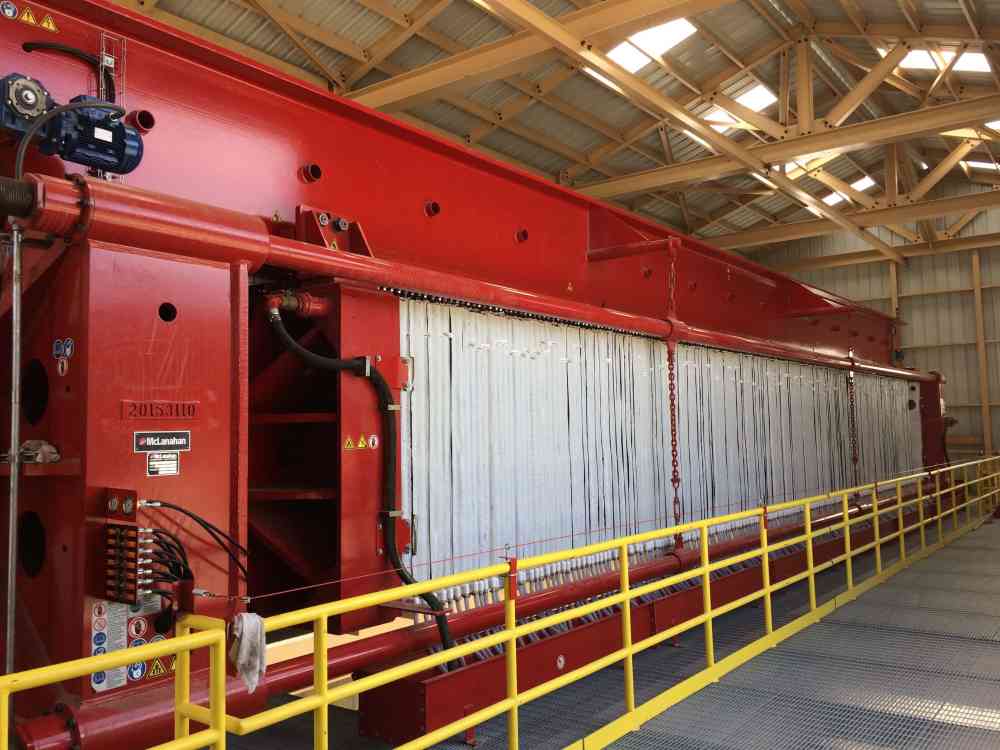 Filter presses are commonly used in the mining industry to dewater tailings and recover process water. These machines feature plates that create chambers when closed, which a feed pump then fills with slurry. The pressure from the feed pump dewaters the slurry, and the water either passes through a manifold created by the holes in the corners of the filter plates or through individual spigots on each plate, leaving behind solid cakes in the chambers. The cakes are then discharged onto either a conveyor or directly onto the ground before the cycle repeats.

Early filter presses date back thousands of years and have roots in several cultures all over the world. During the Shang Dynasty of 1600 B.C.,a type of wooden filter press was developed to produce tea from camellia, a genus of flowering plants native to eastern and southern Asia. Egypt’s 18th Dynasty from 1543-1292 B.C. extracted juice from grapes using a sack press that was squeezed by a large tourniquet. The Romans shared a similar history. Cato the Elder described how the Roman Empire made wine with wooden presses between100 BC and 400 A.D.

The design of the filter press remained unchanged for the most part until the Industrial Revolution in the 18th century. In 1853, the United Kingdom introduced the first mechanical filter press to the world. This machine utilized pressurized cells to obtain oil from the seeds of plants and was a precursor to the Johnson Press filter press. It was the first steel plate and frame filter press in history and was mostly used for food processing and industrial applications.

The filter press made its mining debut in the 20th century. The Eimco plate and frame filter press was used to recover zinc dust from gold cyanide solutions for more than a century.

One issue with the Plate and Frame style filter press was the removal of the cakes when the plates were pulled apart. The cakes would often stick to the frame, and an operator would have to go in and manually dislodge the cakes from the frame. This led to more innovative thinking to solve the problem, and the machine was again updated.

When two Recessed Chamber filter plates are closed next to each other, they form a cavity. The resulting cavity determines the chamber depth, or cake thickness. The cake thickness equals the summation of the two adjoining plates. For example, if the right side of Plate #1 is 20mm and the left side of Plate #2 is 20mm, the chamber formed when the two plates close together is 40mm, which means the cake will be 40mm as well.

The dewatering process is similar to dewatering with Plate and Frame style presses. The slurry is pumped into the chambers formed by the plates, and the pressure from the feed pump forces the chambers to pack full of solids, expelling the water as the solids are packed in. The time, pressure, feed or filtrate flow rates determine when the cakes are fully formed. When the cakes are fully formed, the pump shuts off, the filter plates are pulled apart and the cakes easily fall out from between the plates since there is no frame for the cakes to stick to.

Neither the Recessed Chamber style nor Plate and the Frame style filter press squeeze the cakes to dewater the slurry – a common misconception. The plates are held closed with hydraulic rams, and the fluid pressure created by the pump dewaters the slurry. The filter press only opens and closes to separate the plates and release the cakes at the end of each cycle.

Overhead Beam vs. Side Beam

Overhead Beam style filter presses are more suitable for high-pressure cloth washing systems due to increased space between the plates. The wide opening between the plates allows for less abrasion as the cakes are released, more movement to release cakes, fast plate opening to keep cycle times down and improved cake release. Overhead Beam Filter Presses also allow easier access for cleaning and for changing out the filter cloths.

Side Beam Filter Presses support the weight of the plates with beams running along the sides of the machine. This style features a fast opening system, easier-to-implement plate shaking systems and are shorter to fit small or portable applications. They allow for faster, low-pressure wash systems used commonly in mineral concentration applications.

After the invention of the Recessed Chamber Filter Press, a variation of this style was created with the advent of Membrane Filter Presses. Like the Recessed Chamber style, Membrane style filter presses feature recessed plates, but they also have a diaphragm, or membrane, that lines each side of the plate. At the end of each cycle, the membrane physically squeezes each cake formed in the cavities between the plates.

Whereas the Recessed Chamber style and Plate and Frame style filter presses relied on the pressure of the pump feeding the machine for dewatering, slurry is pumped into the Membrane Filter Press at pressures of no more than 100 psi. The membranes are pressurized using water or air behind the membranes to push the membrane into the cavity and physically squeeze each individual cake. Using water for pressures more than 125 psi is recommended due to the compressive and explosive nature of compressed air. Once the desired squeeze time has been reached, the membrane water is discharged to depressurize the membranes, the press is unlocked, and the filter plates open to discharge the cakes.

Membrane style filter presses can benefit operations dewatering highly compressible solids. As a hypothetical example to illustrate this point, if you squeeze a slurry full of ball bearings, which are not very compressible, the membrane would only succeed in rearranging those ball bearings, offering a slightly drier cake. However, if you squeeze a slurry full of sponges, which are very compressible, you’ll notice a significant difference.

Membrane plates can come in two major configurations: all of the plates can feature membranes, or every other plate can feature a membrane. In this configuration, called a Mixed Pack Membrane, the alternate plates are composed of companion plates, which are similar to recessed chamber plates. The Mixed Pack Membrane is more frequently supplied, as it results in lower upfront capital costs and lower long-term operating costs. 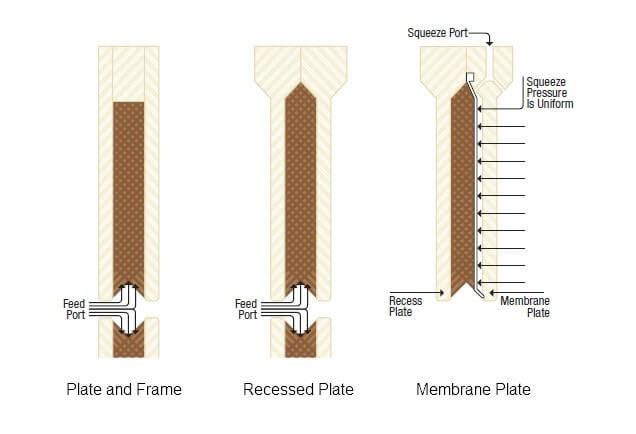 A comparison of filter plate styles.

Where We Are Now

Many mining, aggregate and coal customers are using Recessed Chamber or Membrane Plate Filter Presses to dewater their tailings due to increasing environmental regulations and the cost savings compared to alternative technologies like tailings dams and belt presses.

It’s up to you to determine the best Filter Press for your operation. Based on the type and amount of material you’re dewatering, consider the plate style, size and number, as well as the desired cake thickness and the filter media appropriate for the material in your slurry. 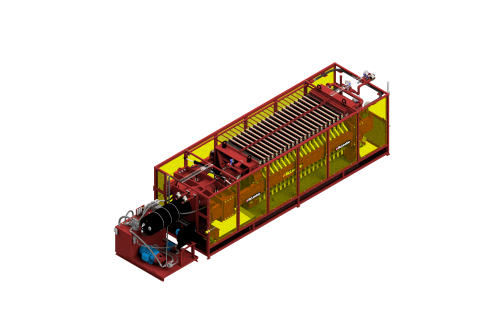 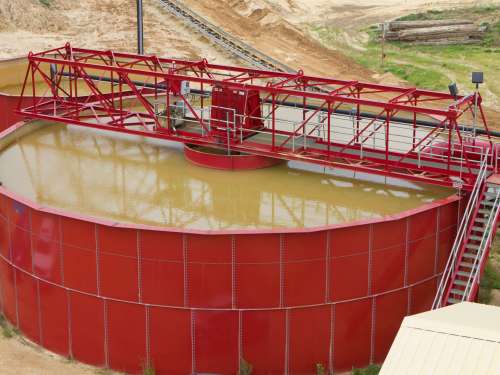