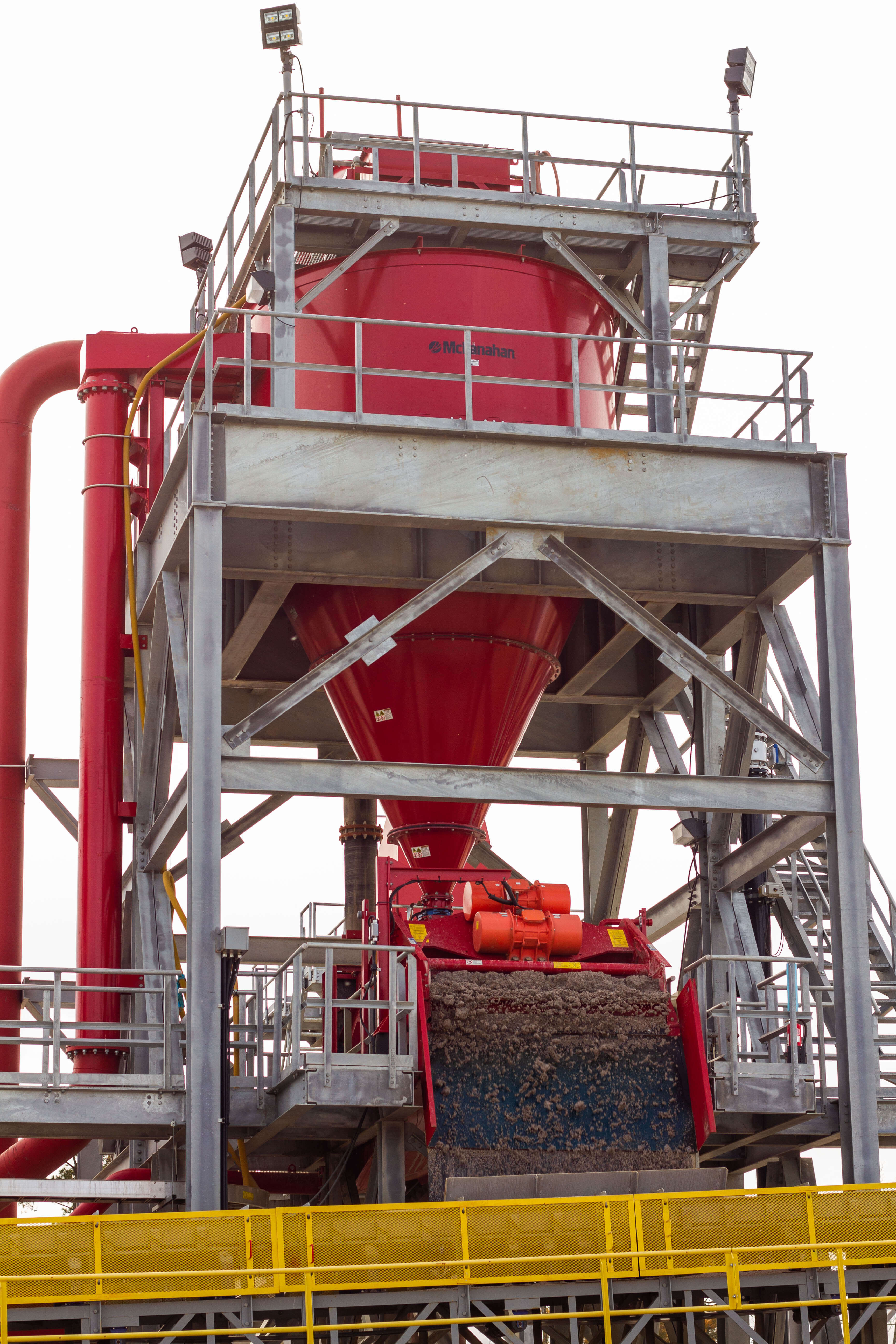 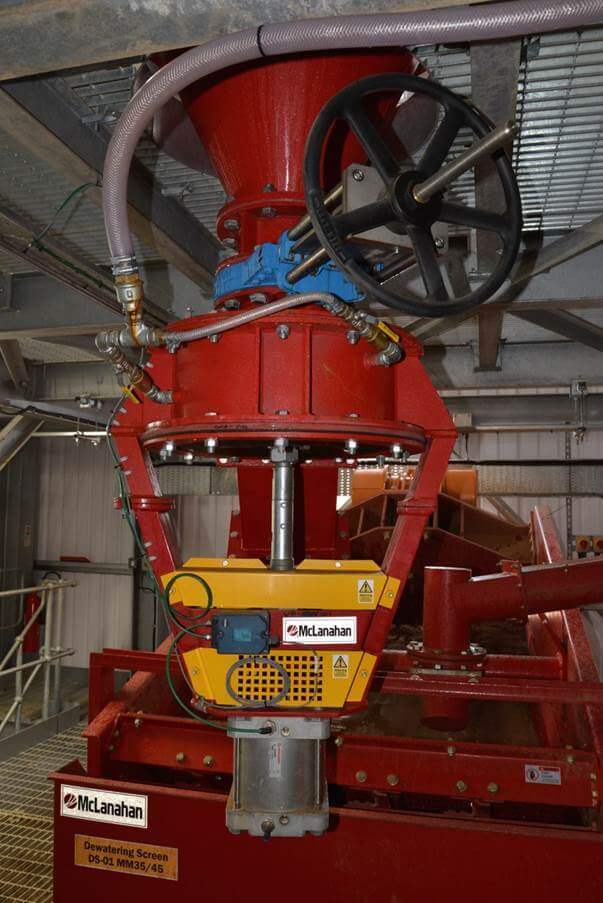 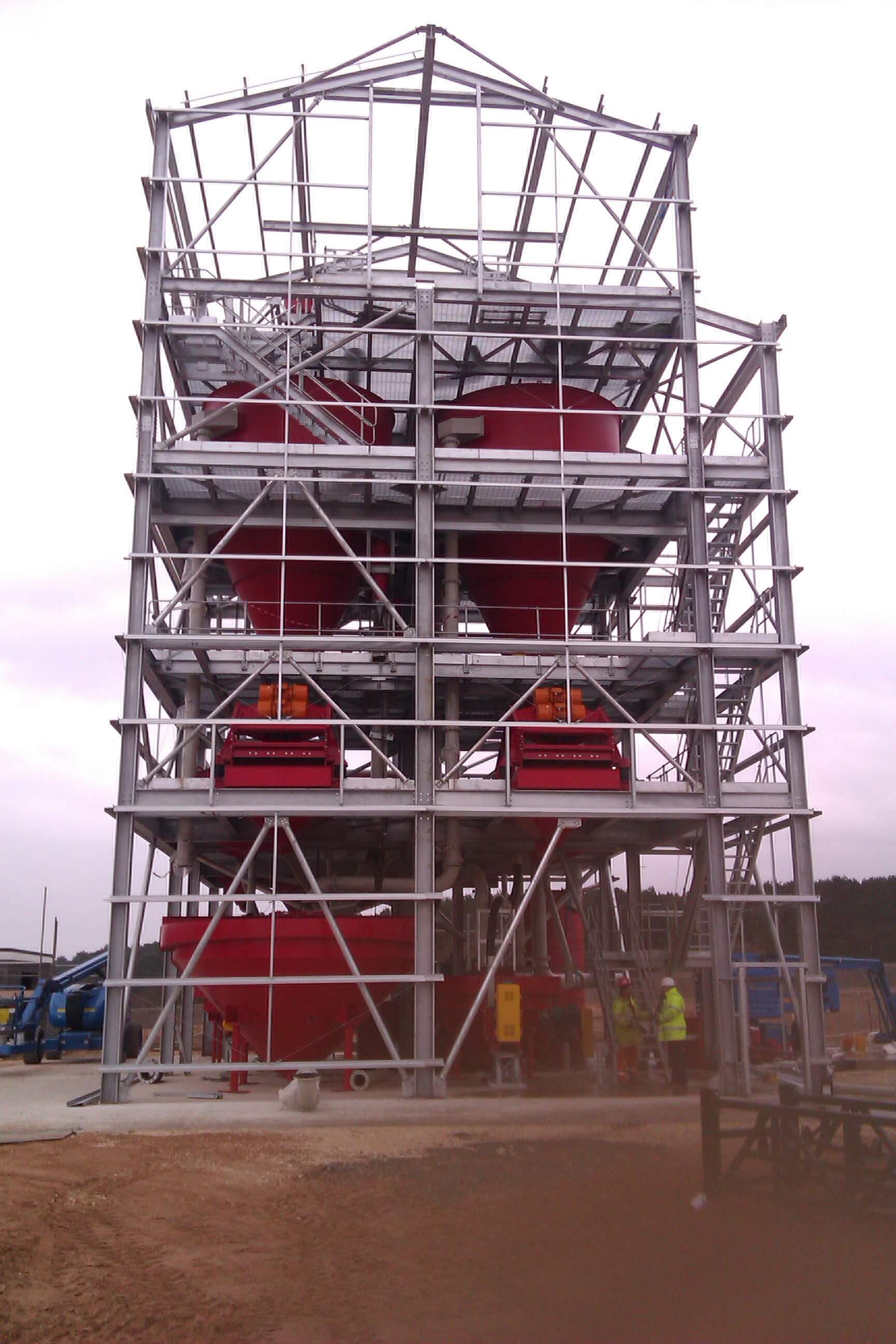 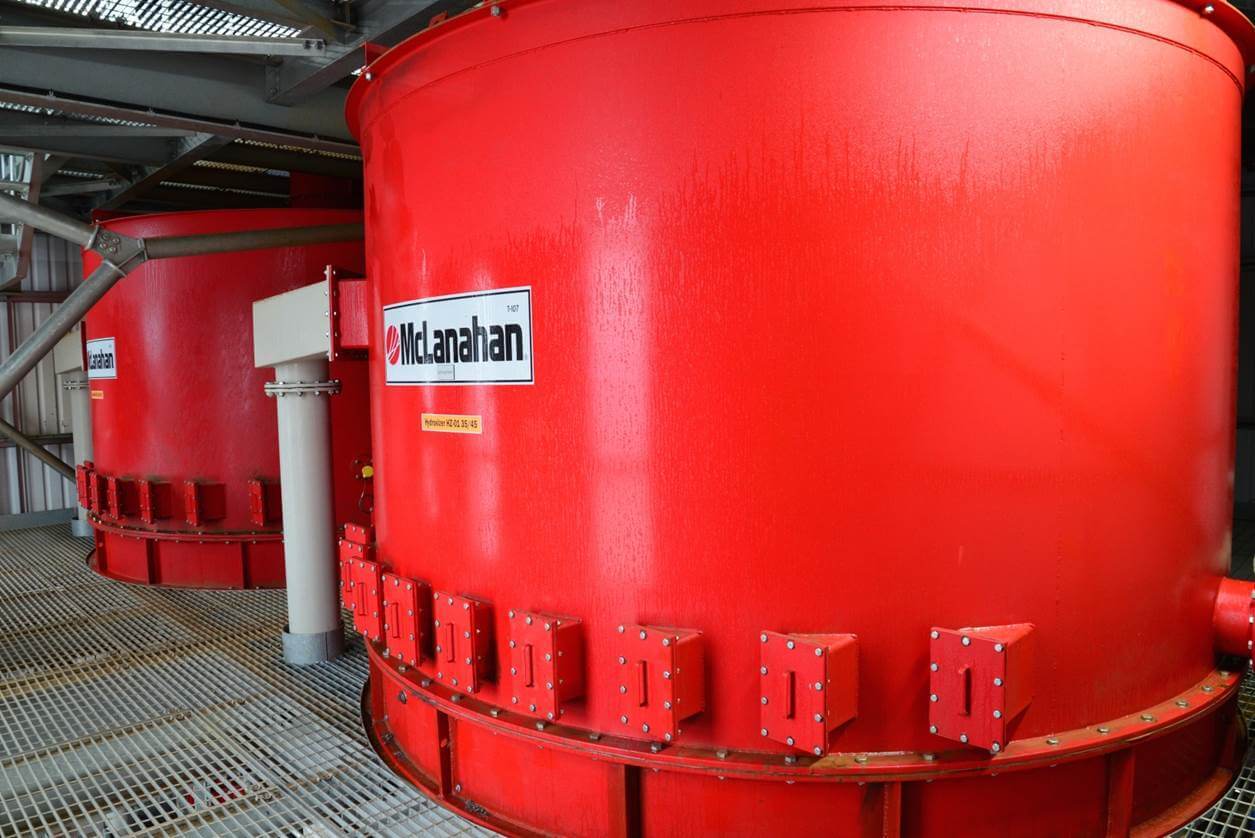 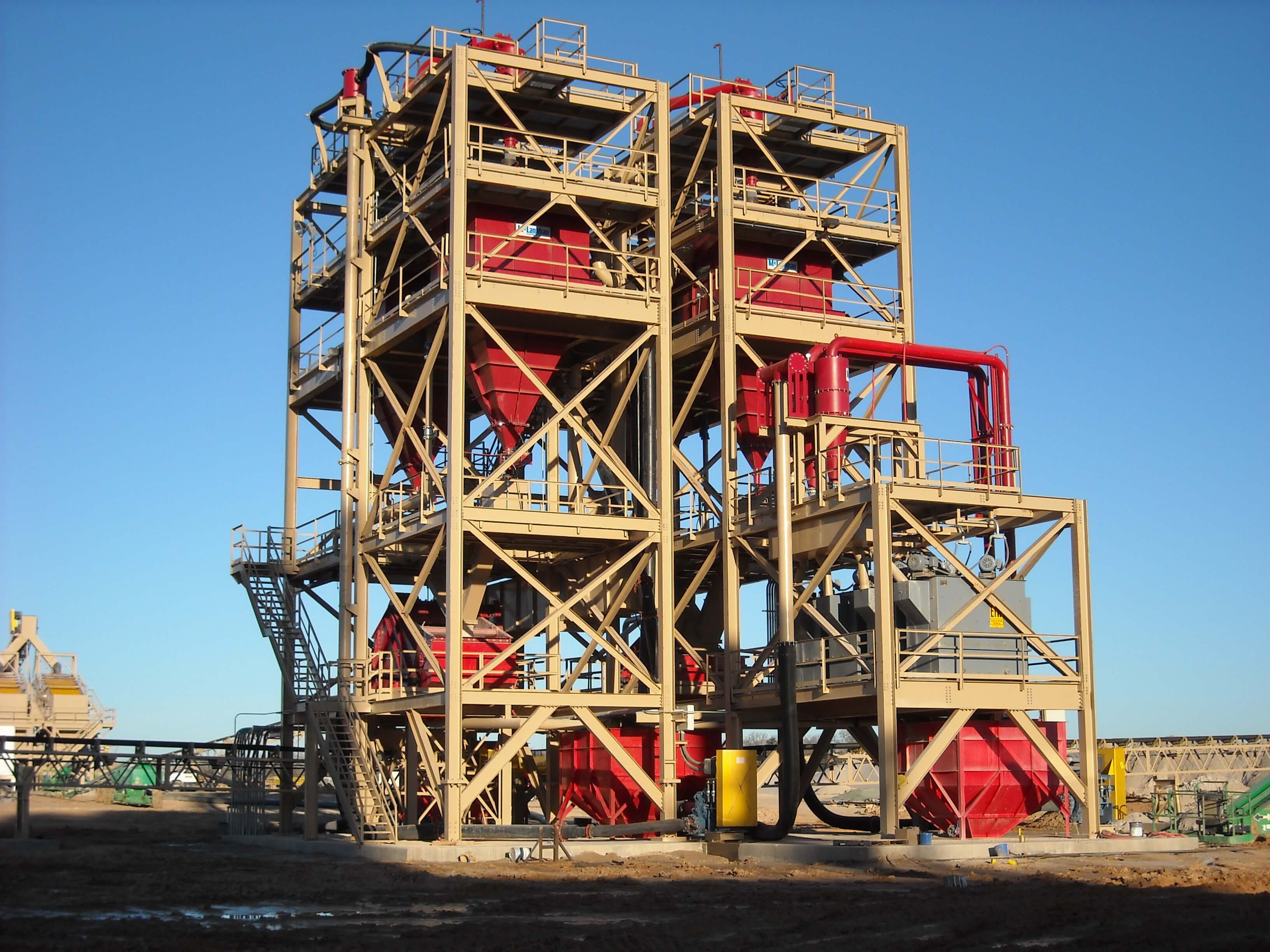 When extremely sharp classification is needed to separate <4 mesh (<5mm) granular material by size or specific gravity, McLanahan Hydrosizers™ have efficiencies of separation comparable to Sizing Screens but at a fraction of the footprint and cost. A producer who needs tight control over classification or who wishes to separate minerals of two different specific gravities or remove lightweight contaminants would be an ideal candidate for a Hydrosizer™.

To make its extremely sharp classification, Hydrosizers™ use the hindered settling principle. This phenomenon is the result of a fluidised (teetering) bed of particles or dense media created in the vertical-walled separation zone.

Feed material (typically Hydrocyclone underflow) enters the top of the unit via a central feed-well. Simultaneously, process water is injected through an array of pipes located near the bottom of the separation chamber. This water injection causes an upward rising current of water that flows over the peripheral weir and is collected in the overflow launder. As particles in the feed meet this rising current of water, finer and less dense fractions are lifted out and swept over the overflow weir. Coarser and denser particles pass downward through this current and are collected in the underflow cone to await discharge.

Particles that are near the size of separation, being neither massive enough to migrate to the underflow cone nor small enough to be lifted out, begin to accumulate in the separation chamber. This accumulation is described as a teetered or fluidised bed, similar in many ways to quick sand. Within this teetered bed, solids settle through the tank in an environment known as hindered settling. This phenomenon slows down the settling rates of particles and allows them to be more critically reviewed as either a member of the coarse or fine fraction. Maintenance of this bed is easily done through a simple set of controls.

The McLanahan Hydrosizer™ maintains separation automatically through a simple PID control loop. All the operator has to do is set the water injection rate. The Hydrosizer™ control monitors the classification environment and adjusts the underflow valve to maintain a consistent performance. There are no screen cloths to maintain, the unit automatically compensates for changes in feed rate, and the only moving part is the underflow valve.

A valve and a flow meter is supplied with every unit so teeter water can be adjusted easily, either manually or automatically. Specially designed teeter water nozzles open when pressurised and provide an evenly distributed spray of water into the Hydrosizer™. On loss of water flow at shut down, the nozzles close and, along with a non-return valve, serve to prevent sand from entering into the teeter water piping.

Typical of Hydrosizers™ of the past, underflow valves have been of a non-linear design such as pinch or butterfly design. While these have been functional, there are disadvantages associated with matching open area with required underflow capacity and, due to their non-linearity, greater difficulty tuning the control loop. McLanahan’s latest development is a bespoke valve, which features a linear open/close profile for more accurate performance. The dart style valve is fully rubber lined and features spring-to-close actuation in the event of loss of air (preventing the vessel from emptying).

Where the units are being used for organics removal, such as in soils washing or lignite removal, the overflow will contain larger organics with the finer sand (equivalent weight particulates). In this case, an interstage screen is used to separate the larger organics from the finer sands. The screen underflow is directed to the dewatering circuit while the organics are either disposed of with plant effluent, collected for use for site restoration or collected for high temperature destruction in the case of contaminated soils. 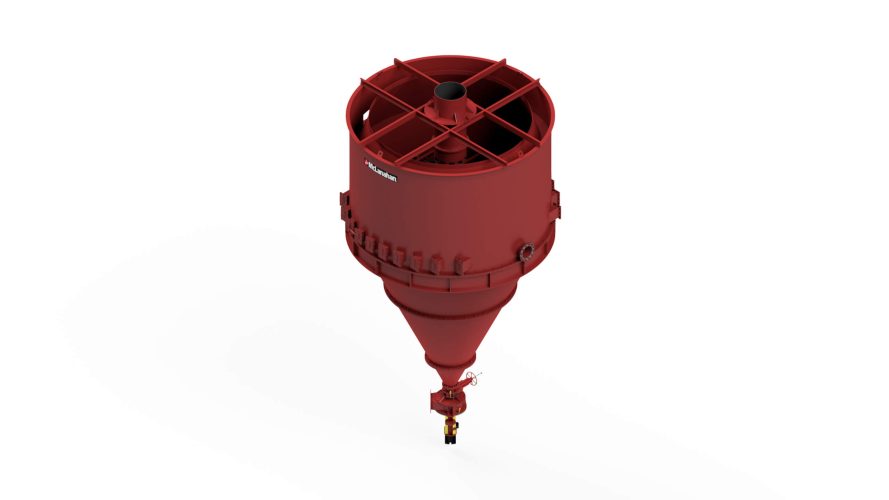 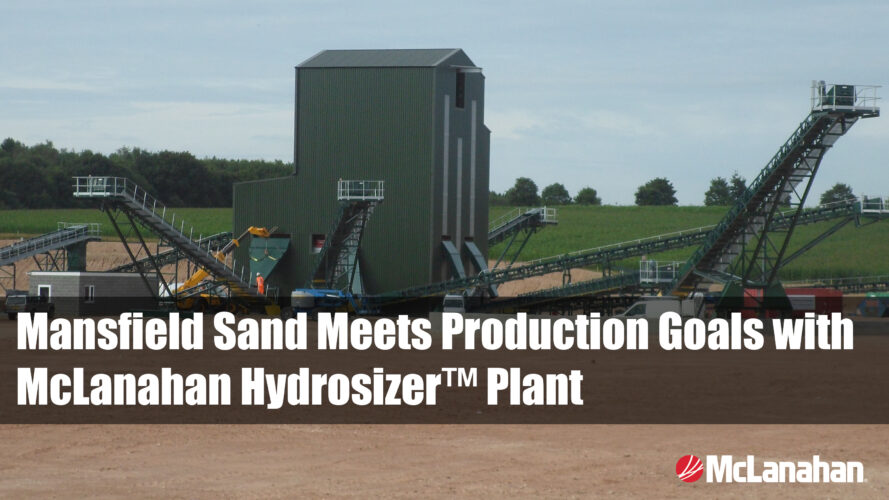 McLanahan personnel have been applying the unique technology of density separation using Hydrosizers™ (aka Teeter Water Classifiers, Density Separators or simply DMS) for more than 40 years. Our process engineers have traveled the world installing these units in a wide variety of industries.

We offer side removable teeter water spray bars, which keep maintenance personnel out of the tank, avoiding enclosed space entry.  The central manifold limits the length of these pipes to less than half the diameter of the Hydrosizer™.

It doesn’t end with McLanahan’s experienced staff. We base our computer simulation models on 45-plus years of field results from many applications from around the globe, but when we are unsure of an application, we have a test unit in our Pennsylvania facility. This test facility allows us not only to look at new applications but also to test unique scenarios in common applications with a continuously operating lab scale unit.

McLanahan is frequently called to audit competitor’s equipment and complete plants due to our reputation for the preeminent knowledge in the industry, so why not start with us?

Because larger particles will have a more significant disturbing effect on the teetering bed as they plunge toward the bottom outlet, plus the greater potential for blockages in the discharge valve, McLanahan recommends 1/4” (6mm) as the maximum size. Small amounts of 3/8” (10mm) can be tolerated in larger Hydrosizers™.

Hydrosizers™ approach the efficiencies of screens and exhibit the most efficient hydraulic classification; however, there are a number of factors affecting the amounts of misreporting materials. The amount of near-size (particles that are close to the point of separation) is the biggest factor. For example, when making a 40 mesh (420µm) cut, if 50% of the feed is between 30 mesh and 50 mesh (600µm and 300µm), the efficiency will be diminished. In addition, finer cuts tend to be less efficient. Ultimately, due to the importance of the final gradations of frac sand products, it is expected that dry screening using specialised screening machines will be necessary.

Round Hydrosizers™, by virtue of the overflow weir being equidistant from the feed source and with the lack of corners having potential dead zones, can be expected to be more efficient. In the last eight years with frac sand production being the highest user of this type of equipment, small changes can turn into significant benefits for ROI.

Pinch valves do not actually reduce flow until they are more than 50% closed. When open plus or minus 25%, the outlet is a narrow slot, which can create a point of blockage (relieved by the PID controller opening the valve), so having a non-linear characteristic challenges the performance. The McLanahan designed dart style valve has a linear action, which provides a more predictable performance and improved wear life.